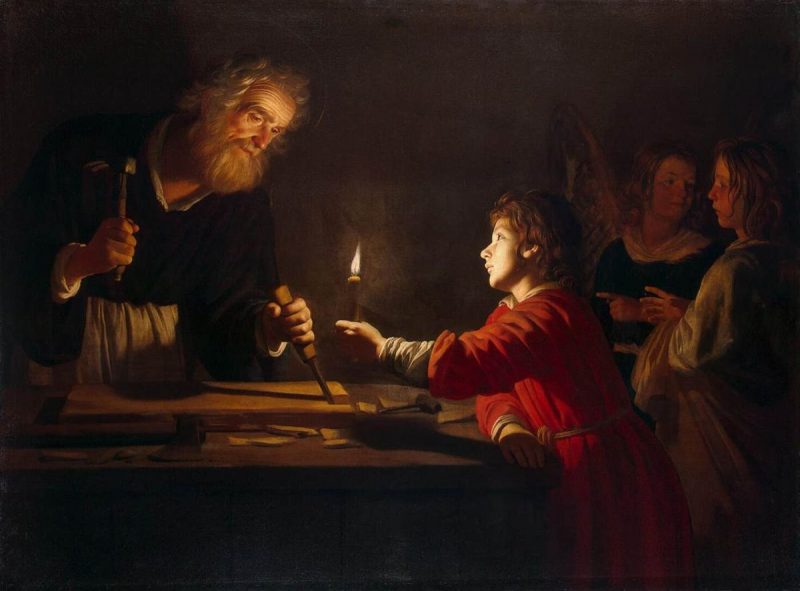 As one may expect, Fr. Calloway models his programme of consecration on St. Louis’ for Mary. It can be done as a group, and he has specific instructions and advice for how to do this in a group setting, or alone. My wife and I did it together. It consists of thirty-three days, and as St. Louis advised, each day consists of spiritual reading and prayer. One minor difference is that Fr. Calloway has one make the consecration on the thirty-third day, whereas St. Louis has it on the day after the final prayers and readings (basically, the thirty-fourth day). A more significant difference is that the readings are generally longer, sometimes much longer, than St. Louis’, while the prayers are shorter. St. Louis sets down a series of prayers every day, including the rosary for one stretch of time; Fr. Calloway only requires the Litany of St. Joseph. I do believe that more prayer would have benefited the programme, but perhaps Fr. Calloway kept it short out of consideration for modern attention spans, like St. Joseph teaching us to walk before we “run the race” (1 Cor. 9:24).

The prayer and themes of each reading, taken from each title in the Litany of St. Joseph, are excellent. My one criticism of this book, though, is that the quality of the readings varies wildly. One of the best is on the title “Patron of a Happy Death,” in which Fr. Calloway, drawing from saints and blesseds like St. Bernardine of Siena and St. Francis de Sales, discusses why it was proper that St. Joseph passed away before Christ’s public ministry, and offers a few reflections of the saints on what his death would have been like. A few other readings, such as the stories of the Holy House of Loreto or the miraculous staircase in New Mexico, are interesting accounts of miracles associated with St. Joseph and the Holy Family. One of the longest readings is about the age of St. Joseph. Fr. Calloway feels very strongly that he was a young man when he married Mary, and I agree that this is almost certainly true and worth repeating. Several, though, could safely have been left out. Though the story of how St. Joseph came to be included in the Roman Canon is interesting, it’s not particularly enlightening.

The main problem is that Fr. Calloway’s writing style is far too casual, even silly at times. After an extensive quote from Ven. Fulton Sheen on the age of St. Joseph, he exclaims “Wow! Fulton Sheen is brilliant!” completely breaking the flow from Ven. Sheen’s serious, thoughtful lecture. He is also fond of repeating the same point many times over, and of variations of “Let me explain,” a mark of an inexperienced writer.

That said, the programme as a whole, the included prayers, and most of the content of the readings are worthwhile, even if he may have been better off following St. Louis de Montfort’s lead and keeping to passages from Scripture and classics like The Imitation of Christ. Fr. Calloway also appears to be orthodox and appreciates saints from across the Church’s history, so the trads out there needn’t pinch their noses while reading and the Novus Ordo folks won’t be needlessly offended. The only people who may take offense are heretics, as he does specifically call out things such as acceptance of abortion and same-sex “marriage” as symptoms of a sick world that needs a spiritual father.

For what it’s worth, his conversion story is also interesting – my wife and I both enjoyed his appearance on EWTN’s show The Journey Home. The subtitle calls him an “Episcopalian,” but in fact he was far worse than that!

In any case, if you’re interested, I highly recommend St. Louis de Montfort’s programme for consecration to Mary first. With that done, though, consecration to St. Joseph is also well worth doing, and, occasional moments of silliness aside, Fr. Calloway is a fine guide.