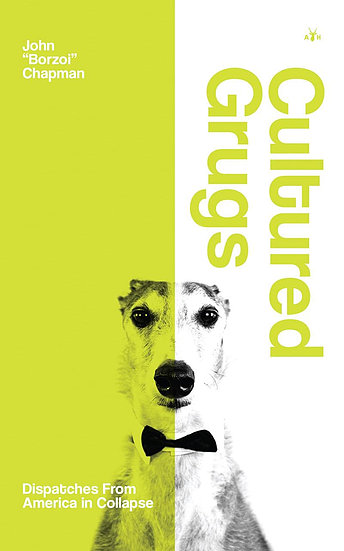 Not that long ago, around 2015 or so, the Right was drowning in blogs and podcasts, but had no books and no art. Now it seems that every Rightist from the most erudite Reactionary to the simplest shitposter has a book they’d like to sell, whether it be political analysis, a novel, or book of essays. A number of broadly Right-wing publishers have also appeared over the last few years. All of this is, of course, a welcome development, as social media and short-form writing, despite certain strengths, are also limited by being short-lived and lacking space to develop any serious ideas. Today, let’s take a brief look at Cultured Grugs: Dispatches From America in Collapse, a collection of essays by John Chapman (a.k.a. “Borzoi” on social media) and published by one of those independent outfits, Antelope Hill.

Most of these essays have been published previously, six in The American Sun, eight on Chapman’s own blog Race Borz, leaving nine original essays. Like most essay collections, subject matter and interest vary from entry to the next, but a few of these are excellent and all are at least worth reading. There’s also some thematic uniformity across the book so that all the essays do feel like they belong together. That theme is summed up in the subtitle, so if you’re looking for some pleasant reading you should look elsewhere. If you want to stare a collapsing culture in the face, though, Chapman has you covered. See, for instance, “PissEarth, 2025,” where he explains, “You must understand, I do not tell you these things to hurt you, but to warn you that this new world wants to hurt you. It will.”

This is not to say that Chapman is all doom-and-gloom, though. The book’s outlook is largely pessimistic, but there are valuable insights throughout that are worth noting. In discussing Pentti Linkola, for example, he spends some time talking about Left- and Right-wing environmentalism. He notes:

The right has been gaslighted into believing that to care about nature and the environment is a leftist phenomenon. The irony is that even where the issue has been full of leftists, these people always trend towards being heterodox in their thinking and beliefs because to engage with nature is to engage with reality, something the ideological are conditioned to flee from like the plague.

It’s not an original insight that most Leftist environmentalists are posers at best, but the above observation and the contrast with Linkola explain why Leftist ideologues are so often unserious in their environmentalism. Linkola doesn’t fit neatly on the conventional Left-Right spectrum, but:

While the man has admirers across every iteration of the political spectrum except for neoliberals and their intersectional stooges, he found appeal on the far-right the way many strange idols have found themselves on those altars: he told the truth when no one else would and he wouldn’t be cowed by maudlin and manipulative appeals to tears. He has refused to retreat to platitudes and stood his ground when shown images of suffering POC meant to push his country toward open borders.

This accords with my own observations over the past several years; many people on the Right were driven there by their refusal to give in to emotional blackmail from the mainstream media, schools, and any other institutions controlled by the Left. The people these Rightists idolise tend to be remarkable examples of the same thing. It almost doesn’t even matter what a public figure actually believed; he just needs to be hardcore about it.

Now, the best essays tend to be early in the book. I enjoyed and definitely recommend Cultured Grugs, but the original essays don’t quite justify the price of purchase in themselves and the highlights can be found by searching through Chapman’s articles on The American Sun and Race Borz. The best audience for the book, then, are those like me who are largely unfamiliar with Chapman’s work and who want to support independent publishers like Antelope Hill.