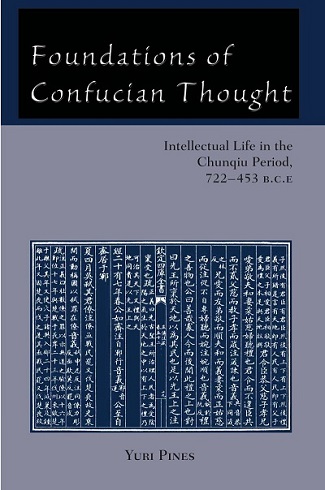 A few years ago, I read and reviewed Yuri Pines’ book The Everlasting Empire, which I highly recommend to anyone interested in Chinese intellectual history, or Chinese history generally for that matter. Since I enjoyed that book, when I was looking for more work on Confucianism a while back I picked up one of his earlier books, Foundations of Confucian Thought: Intellectual Life in the Chunqiu Period, 722-453 B.C.E. Confucius and his followers did not, of course, emerge from nowhere, so a full understanding of Confucianism requires some knowledge not just of their source materials (primarily the Five Classics), but the intellectual milieu they originated in.

In fact, Pines’ book is broader than that. Though Confucianism does receive more attention than the rest of the Hundred Schools of the Warring States period, Pines refers as often to Warring States (typically by its Chinese name, Zhanguo) thought as to Confucian thought in particular. So, what he’s doing is tracing the origin of the terminology and ideas that formed the context and foundation for Zhanguo intellectual life.

Now, I’m primarily interested in the evolution of Confucian concepts and terminology so my goal in this post is just to share some of the more interesting points, but it’s important to note that Pines’ primary source is the Zuo commentary on the Spring and Autumn Annals. I’ve written about another commentary on the Annals, the Gongyang, previously, but the principle difference between the Gongyang and Zuo, for our purposes, is that the Gongyang is primarily a philosophical work written after the Spring and Autumn, while the Zuo is primarily a historical work likely, as Pines argues, written during or only shortly after the Spring and Autumn. He also draws from other sources, such as bronze inscriptions and other historical works, but the Zuo is by far the most prominent because, as he argues, it’s the most thorough and reliable source available. He goes into a lot of detail on the nature and composition of the Zuo, which is interesting but the conclusion is that, with a few caveats, the Zuo does give us authentic speeches from throughout the Spring and Autumn, and as we’ll see we can discern the changes in ideas and terminology that made up the Spring and Autumn intellectual milieu.

When I first began reading the Analects, one of the first concepts explained by the translators I read was that of the junzi, often translated as “gentleman” or “superior man.” This originally referred to a high social rank, I understood, but Confucius and his followers used it to refer not to the class but to the virtues a good man should possess, similar to the shift in meaning of “gentleman” and “noble” in English, in fact. However, we can see from the Zuo that this use of junzi preceded Confucius. Pines cites Xiang Zhong of Lu referring to a Qin dignatary as a junzi due to his refined behaviour in 615 B.C., and similar examples from 582 and 543 (Confucius, remember, was born in 551 B.C.).

We can also look at the term ren, translated by Pines and others as “benevolence.” This term was an old one, which originally referred specifically to the ruler or heir apparent, but by the mid-Spring and Autumn had broadened to include aristocrats. It also broadened into a vague term, as Pines explains:

One speaker refers to ren as an antonym of toughness and stubbornness; another considers it an antonym to licentious behavior (yin); another simply says that “not neglecting one’s origins is ren“; while yet another considers ren as a kind of all-encompassing virtue that combines “de,” “zheng” (correctness), and “zhi” (uprightness).

He believes that part of the reason for the many usages of ren is that it was a new and fashionable term so people were eager to use it, even without yet nailing down a specific meaning. In any case, its meaning did narrow, returning mostly to its original sense of benevolence but no longer exclusively referring to the ruler.

Now, one whose knowledge of Chinese philosophy is limited to translators’ introductions to the Analects may assume that ren is an example of Confucius and his followers rectifying a name, so to speak, by returning a moral term mostly to its original meaning. However, the evolution of this term again preceded Confucius and of course the Confucians weren’t the only ones using ren. This brings us to the term I found the most interesting, xiao, whose meaning does largely come from Confucius but in which he wasn’t just a transmitter but, in fact, a maker.

Xiao, in its normal meaning from the late Spring and Autumn onwards, means “filial piety.” It’s the virtue that I associate most with Confucianism and with Chinese philosophy in general. What’s more Confucian, after all, than honouring your parents? Its original meaning from even before the Spring and Autumn, though, didn’t refer to one’s parents but to one’s ancestors. In fact, it was often used as a verb meaning “to present the offerings,” i.e. in the course of rituals of ancestor worship. There’s still an ethical aspect of this, of course, and it’s not hard to see how a term meaning “honouring your deceased ancestors” can shift into meaning “honouring your parents,” but the fact remains that xiao did not mean “filial piety.”

Surprisingly, xiao actually fell largely out of use during the mid-Spring and Autumn, but was revived by Confucius. Pines notes that xiao is mentioned nineteen times in the Analects, but only once does it refer to sacrifical rites as it did previously. The rest of the time it means “filial piety” as we’d think of it, nurturing one’s parents and honouring them in life and death. Pines also speculates that this may be why Confucius is asked about the meaning of xiao four times – because he used the term in a novel way.

The last term I’d like to point out is li, meaning benefit or profit. Those only familiar with the Confucian Four Books may assume this term had a negative connotation, since Confucius and even more so Mencius view li not as a virtue at all, but if anything as more of a vice, a “despised feature of petty men,” in Pines’ words. Yet, the Confucians’ contemporaries like Mozi and the Legalists viewed li as a legitimate political goal, and the speeches recorded in the Zuo reflect this attitude. It’s a good example of how, though Confucianism is by far the best-known Chinese philosophy, it is by no means the only one and Chinese thought among Chinese philosphers of the Spring and Autumn and Warring States periods was complex and wide-ranging.

Now, most of the above discussion comes from just a couple chapters. The rest of the book covers a variety of other topics, such as the attempts to create international order among the various States as Zhou authority collapsed, the changing role of ministers vis-a-vis their rulers, and the changing sense of what Heaven/Tian is and how it interacts in human life. It’s all interesting, but those looking to learn more about Confucianism in particular need to keep in mind that the subtitle Intellectual Life in the Chunqiu Period is more descriptive of the book’s content than its main title Foundations of Confucian Thought, and it’s more of a work of history than of philosophy. Nonetheless, it’s a great resource for those interested in this period of Chinese history, philosophical history but also political history.