The most popular of those posts was my article on Robert Lewis Dabney’s book A Defense of Virginia and the South. This was also the most ambitious of the year and the most difficult to write because it took me a while to decide how to approach a book so wildly politically incorrect. I decided to give a brief introduction and conclusion, but mostly let Dabney do most of the talking for himself as I go through chapter-by-chapter. At 5,556 words it’s also by far the longest I’ve ever written, over twice as many as the second-longest’s 2,180 words. That second-place finisher was also the third most-popular of the year, “Why Do You Not Study the Odes?” This was my call to everyone, but especially those on the Right, to focus on the beautiful and not get caught up in outrage porn and degeneracy. In my opinion, these two are my best posts of the year, though I slightly prefer “Odes” because it’s on a subject I’ve always cared a great deal about but haven’t addressed adequately before. I’d give a bronze to “Is There a Hierarchy Among the Arts?” This also addresses a topic I’ve touched on previously, but this is easily the best expression of it.…

Those of you who follow me on twitter have likely already seen me talk about it, but I’ve added a page for books that I particularly recommend.

In short, I thought the Post Highlights and Review Index page had a shortcoming in that it doesn’t indicate which books I’ve reviewed are ones that I’d actually recommend. For the recommended reading list I broadened the scope a bit, so it covers the books that I’d recommend more-or-less universally to any educated person who asks.

So next time you’re looking for something to read and would like some suggestions, check it out.…

I consider myself an honest man, so by no means did I lie to you about publishing a post every week; it’s just that I wrote a cheque I couldn’t cash. I actually did have something last week that wasn’t posted, and that was because quality control stepped in – the post I had planned just wasn’t very good. As I said on twitter, my blogging policy is, “Do you want it done fast or do you want it done right?”

Anyway, it turns out that weekly updates on a book blog that you run alone isn’t really feasible if you’re going to read anything of any significant length, even if one occasionally strays off-topic. From here on out, I’ll just publish new posts as they’re ready, which theoretically should mean more time to polish each review and thus, posts will be fewer but better. I recommend subscribing to the blog’s RSS feed, though I also promote new posts on my twitter account.

There will be a new post tomorrow, on Shakespeare’s 3 Henry VI.

So, my apologies for the delays, but thanks for reading. If it makes you feel any better, here’s something beautiful to look at, a painting by James Tissot of a couple of weeaboos: 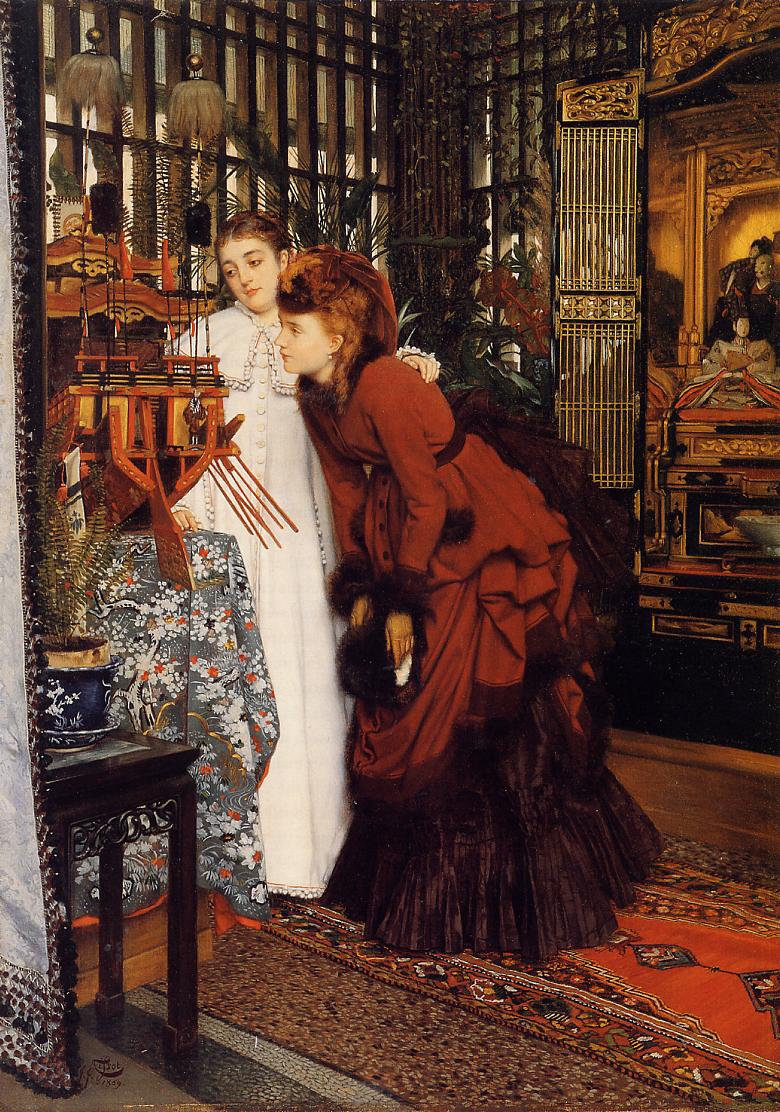 A man is more likely to pursue his goals seriously if he makes a public commitment, and since some of my goals for this year concern this blog I thought I’d go ahead and offer this “preface” for 2016.

First, I plan to publish a new post every week, as I did from late 2011 through early 2013. This weekly schedule was difficult at times, but the routine was satisfying for me and should also, I think, give you the readers something to look forward to more regularly. To start, this will likely be every Tuesday, though that will be subject to change depending on how my schedule changes during the year. If possible I’ll try to post multiple times in a week, so subscribing to the RSS feed may be a good idea if you just cannot stand the thought of missing out, but for now I’ll only guarantee that one Tuesday post (or your money back!).

This schedule will be a bit difficult, since I mostly review books which, of course, vary wildly in length, so I’ll start the year with a few short books that I can review and schedule out, and write up a couple of evergreen posts to fill any gaps that come up. Once I have a comfortable buffer, though, I plan on doing sticking to (mostly) syntopical reading.

The primary goal will be to finish the books I have on the War Between the States. I did one book last year, Trudeau’s biography of Robert E. Lee, but I’m currently working on Shelby Foote’s The Civil War: A Narrative, which will be followed by Jefferson Davis’s The Rise of the Confederate Government and its follow-up The Fall of the Confederate Government, Raphael Semmes’s Memoirs of a Service Afloat During the War Between the States, and a couple more biographies. Unfortunately, these are all very long, hence the concern with a “buffer” I just mentioned.

Second, I’ll be going through all of Shakespeare’s works, which I’ve been wanting to do for a long time. These will be scattered throughout the year, though, rather than one after another.

Beyond that, I would like to go through a number of Greek classics, as well as the many books by, and about, Ezra Pound that I own. There are also a lot of odds and ends, of course, that I’ll get to as time permits – mostly more books, but also whatever movies, games, and such that I think are worth writing about.

So, those are the goals. Blogging year 2016 will officially start next Tuesday, and as always, thanks for reading.…