In the tradition of blog reviews of random things, this post introduces a new feature here at O.K.! – Rock Site Reviews. What I’ll do is, with each installment, write a review of the official website of some rock band. Given the wide range of styles, and even wider range of quality, of different official websites, I figured this could provide minutes of fun.

Since I cannot comprehend passing up the wordplay, we will begin at the beginning, which is Genesis, whose official site is genesis-music.com. Just <genesis.com> was taken by some computer company, apparently.

Anyway, as soon as you load the page some links come up, a television falls from the sky, a moon floats around the top-left corner, and some deformed dude runs across the screen. If that’s not enough to grab your attention, the letters in the name “Genesis” change font as the mouse hovers over them. It’s a subtle touch, but I spent about ten minutes playing with the letters before I finally clicked something.

Let’s start with the News section. Now, websites devoted to older bands often struggle to maintain a news section, since many don’t even tour, and you can forget about albums. Luckily, Genesis seems to still do the occasional tour, including one that started last year. Genesis-music seems to update with some regularity, and was even nice enough to link to a fansite’s contest. In a further show of generosity, they also link to several tribute bands. Another nice touch is the articles and reviews about the band all the way from the early 1970’s on. It’s definitely nice to have such things available, but unfortunately they’re organized like the news – that is, most recently posted on top. The database is searchable, but why they aren’t organized by topic instead of date is puzzling. There’s also a Press section, which seems to be just like the News but more formal and not updated as often.

Browsing along the convenient navigation bar atop the screen, just under the stylish banner, we progress to Contests, which just takes us to a relevant post in the News section to a contest that ended last year. Okay, whatever.

Skipping Community for a moment, let’s check out the the most critical part of any band’s website – Discography – and what an elaborate Discography it is! Not only do they have the release information, tracklisting, and lyrics for all of Genesis’s albums, they have such information for each member’s solo material. Way to go above and beyond the call of duty, and I must applaud them including lyrics. They’re such an obvious thing to have, but as we’ll see over and over later in this series, many sites don’t even do that. Alas, all is not perfect. Each song tantalizingly displays a drop-down menu offering “Lyrics,” “Description,” “Artist’s Comments,” and “Personnel,” but lyrics is the only one with any content. Allow me to state the obvious, “What is the point of having these sections if there’s nothing in them?” Maybe they’re planned, but I couldn’t find any songs with any description or comments. Oh, well.

Moving on, the Multimedia section has some videos, as well as some photos and images of their album covers.

Where genesis-music really shines, though, is in the FAQ section. Now, most of this stuff is fairly straightforward answers to common questions, but it’s very convenient to have. Impressively, though, they also field more potentially awkward questions like “Is there animosity between Steve Hackett and other members of the band? Is that why he left?” Amazingly, in the Genesis General FAQ section, they actually answer the inquiry

How do I find out what bootleg CDs / DVDs / VCDs / VHS are available and how do I get hold of them?

Now, here you’d expect the basic RIAA line about how bootlegs are illegal so don’t do anything with them. Instead, genesis-music links to an online guide to Genesis bootlegs, and then continues

As for how to get hold of the recordings: start by joining the Yahoo Group “Genesis Trades” […]

Otherwise, try asking in the “Boot Info and Exchange” forum! More often than not, someone will be only too happy to help you out, or explain to you how to get started in trading.

Only one rule – Don’t buy or sell (that includes eBay.) Anything that you may have seen for sale on eBay, at record fairs, or elsewhere is available for free through trading or weeding. It should also be remembered that the versions circulating amongst collectors are always superior to those being sold, often with better sound, extra tracks, lovingly created artwork and so on. Don’t waste your money!

Not all is well, though. Returning to the Community tab, we’re greeted with a list of most recent topics in their message board, some statistics for the same, and a poll. To view the boards, however, you have to register.

First of all, I don’t want to. Secondly, how do I know if I want to join if I can’t see what I’m getting? Playing along for a moment, though, the “Join Now” button tells me all the things I can do as a member, which do look pretty good, except for one thing – a “Premium Membership” costs $35.

Does anyone do that?…

For a class I recently read the short story “The Moon Moth,” by Jack Vance. Part of the premise of the story is that everyone on the planet the story takes place on wears a mask at all times. The masks serve to inform others of one’s social status, as well as one’s personality and current mood. So, a renowned craftsman would wear a different mask than a young craftsman, and both wear different masks than a slave or prince. These masks are tremendously important in this world, and are the primary means of determining how to address someone.

This sounds outlandish, and though my professor drew an analogy to the type of car one chooses to drive, there’s really no parallel in the real world. However, the concept reminded me of the avatars used on online forums.

As in “The Moon Moth,” a person has total control over his appearance in an online environment (or at least in the types of environments considered here). I’ve discussed the significance of one’s screen name before, but the avatar is just as important. After one has been visiting a forum for a while, it’s common to identify others by their avatar more than by their name, not unlike in the real world, where one first recognizes others by their face. Except, unlike one’s bare face (barring, say, battle-scars) one can use an avatar as self-expression. 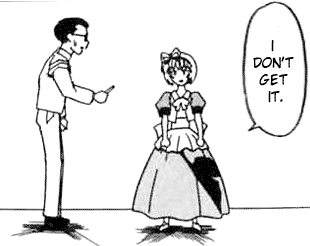 Probably the most common form of self-expression via avatars is an indication of one’s interests. If I were to use the above image as an avatar, I’d clue in others that I’m at least interested in comics and animation in general, those who recognize Rei (the female character) could also assume I specifically like Neon Genesis Evangelion, and those who are really nerdy (yeah, like me…) and recognized this specific image could also infer that I’m a fan of Kiyohiko Azuma. Of course, the text in the image can also say something about me, though usually an avatar is a little more subtle than that.

For example, I change my avatar on forums I frequent depending on what topics I’m involved with at the moment (I post infrequently enough, though, that I’m often only involved with a few threads at a time). When posting a musical parody (note: this links to a Megatokyo fanwork), for instance, I generally use this image of John Lennon’s ear:

Alternatively, on other forums, such as Civfanatics, where I’m more laid back, I’ll use an appropriate image (this particular avi is taken from the webcomic Attack of the Amazing Flying Spud):

Not a whole lot to add today – just a couple brief items of interest.

First, for those who applaud Senator Obama’s recent speech on race that’s gotten so much attention and praise, you may be interested in this alternate take, courtesy of “Men Like Trees, Walking.”

Second, on a lighter note and for the writers out there, the Gender Guesser. Give it a piece of prose writing, and it will estimate whether you’re a man or woman based on the words you use. I fed it my “Somewhat True Story,” as well as a few other pieces, and I was consistently guessed as a man. No surprise, but it denies me the “you write like a girl” jokes.  Do read the explanation of the Gender Guesser, though, since it’s both interesting on its own but also explains how they came up with their algorithm.

That’s all for now, folks.

Yesterday’s massive, worldwide Scientology protests appear to have been mostly successful. By some estimates, several hundred people turned out, and even Newsweek has run an article on the whole endeavor. More info can be found on this forum. Personally, I’d be interested to know just how many of yesterday’s protesters were really from Anonymous – this project has spread so far around the internet, that many are aware of it, and even people who’ve never been to a *chan may have been involved.

I’m also still waiting to see if this leads to wider, more significant internet-based activism. So far, such activity has been limited to individual websites and blogs. However, between Chanology and Ron Paul’s massive online support, the scale of activism is quickly broadening. Paul’s online base appears to have failed to get him the Republican nomination, and Chanology’s effect has yet to be seen outside the *chans themselves. If the movement is perceived to be effective, we can expect more such projects on other topics.

That said, just how successful can Chanology be? How does Anon know if Scientology has lost? Scientology itself isn’t going anywhere, all that’s likely happen to the CoS if Anon plays this well is losing its tax-exempt status and perhaps diminish in number. That would be a victory for Anonymous, but it’s nothing dramatic and while Anon has showed a lot more stamina so far than many expected, simple human nature means that they have to get tired eventually.