The Fall semester ends tomorrow. It’s all over but the crying now, my reader, as I wait for my final exams and projects to be graded. Here’s an actual image of one of my professors grading my last assignment (submitted electronically): 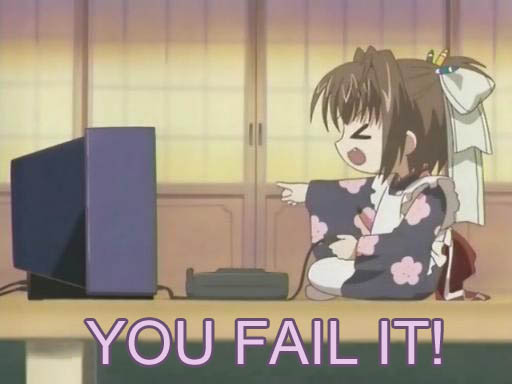 If you have any sort of online tag – email address, forum or gameworld tag, whatever – that uses all or part of your real name, I’m laughing at you right now.

Let me put that statement into context. Confucius, when asked what he would do if he were appointed governor of a state, would respond that one of his first actions would be to “rectify the names.” Unsurprisingly, the common response to this answer was often along the lines of “Is that a joke?” Confucius’s idea, though, is that a name is not just a collection of sounds we use to indicate something, but that a name refers to what a thing really is.

Consider, when asked for my name, I don’t just say “My name’s Richard,” but “I’m Richard.” “Richard,” I am saying, is not just a convenient tag, “Richard” is what I am. “I am Richard.” In my particular case, the collection of sounds “r-ih-ch-ar-d” does not really have any meaning apart from me. “R-ih-ch-a-r-d” indicates no idea or object other than me. Other names, of course, have multiple meanings, usually fairly obvious. “Faith” not only indicates the girl, called “Faith,” but also an attribute her parents presumably hoped she would have.

On a broader scale, and likely what Confucius had in mind, is the name as propaganda. What we call a thing can affect what it is, or at least how we perceive it. The United States is often referred to as a democracy, so many believe that the US is a democracy (it isn’t and never was, but that’s a whole other blog post). One can look to George Orwell for extreme examples of this concept – 1984‘s Ministry of Love and Ministry of Truth, for instance. Alternatively, A.A. Milne explained the topic near the beginning of Winnie-the-Pooh: “Well, when Edward Bear said that he would like an exciting name all to himself, Christopher Robin said at once, without stopping to think, that he was Winnie-the-Pooh. And he was.” (emphasis mine).

Moving back to a personal level, we generally aren’t able to choose our own names. Furthermore, we are named as soon as we are born, so our names aren’t necessarily accurate, though we may grown into them, so to speak. One neat thing about online environments is that we are able to name ourselves.

We designate who we are.

What an amazing opportunity! The ability to tell a group of people how we think of ourselves. Surely, this is a task to be undertaken with much consideration. After all, if a name determines who we are, then we ought to consider this task very carefully. For this blog, I chose the tag “Oll Korrect” because, first, it resembles the “given name – family name” setup I am used to, so it indicates the value I place on tradition. Furthermore, it is one explanation I have seen for the origin of the abbreviation “OK,” the joke being that neither character is correct. The fact that I created the blog for a class makes the joke all the funnier, so one can see I appreciate humor as well.

Now, some people are attached to their names, so I can see why they may want to maintain that indicator online. However, it also appears to waste a valuable opportunity to define oneself. As Edward Bear became Winnie-the-Pooh, so I, at least online, become Oll Korrect. A new identity for a new environment, almost as though I were to change my name and move accross the globe, except I can maintain both my online and offline identities.

If this sounds techno-utopian, do consider that I’m aware that the internet is not necessarily any prettier than the “real-world,” and in fact can be just as ugly. Also, I wouldn’t go so far as to say that one’s online identity is completely dissociated with its real-world counterpart. Rather, an avatar is a reflection of its creator, or perhaps a role, like a voluntary schizophrenia.…

At first glance, it would seem reasonable that, because internet users are anonymous (or at least as anonymous as they choose to be), racism and sexism would be practically nonexistant on the internet. In fact, I’ve heard several people refer to online environments such as message boards, chatrooms, and computer games as near-perfect meritocracies.

In reality, this is not the case. First, racism and sexism are not unknown on the internet. The KKK can set up a website just as easily as anyone else, and racist or sexist attitudes may simply be less visible on message boards because users are not aware of other users’ race or gender. For a mildly amusing account of the “Boys Only” attitude of many gamers, see this article by Whitney Butts.

Even without the old standby segregators like race and gender, there’s no reason to assume that other factors won’t simply take their place. Almost any community of decent size will have smaller cliques of people who can be more or less hostile to other cliques. In a basic form, one can be judged online based on username, avatar image, signature, spelling and grammar, and, of course, the ever-popular religious or political views. If you’re ever bored, go to a discussion board with a definite political bias (say, the neoconservative Free Republic), and post something diametrical to the majority opinion to see how long it takes to get banned. For an amusing discussion of Free Republic’s forum, see this board at ALIPAC’s (anti-illegal immigration group) forum.…

According to the Associated Press, Comcast inteferes with users uploading online content via BitTorrent and similar applications, allegedly to save bandwidth for its other customers, though some suspect the move is related to the piracy such applications are often used for.

Now, I have no problem with taking action against piracy or conserving bandwidth, but Comcast’s move also affects people who use BitTorrent for legitimate purposes. It is plainly unfair to punish the innocent along with the guilty, and defeats the purpose of law to violate one person’s rights to punish the guilty. Remember, the guilty party is a criminal for violating someone else’s rights, and the purpose of law is to preserve rights for everyone (of course, Comcast should leave law enforcement to the justice system, assuming their motivation here is anti-piracy).

As a parting thought on this topic, no lesser man than Abraham once wrestled with the justice of harming the innocent along with the guilty:

“What if there are at least ten [innocent men in Sodom]?”