Those who care about spoilers should note that I’ll be discussing the endings and several plot points of both Your Name and 5 Centimetres per Second. I generally don’t care about spoilers, but will say that Your Name is more enjoyable if you don’t know whether it has a happy ending or not (and remember, Shinkai Makoto isn’t afraid of downers) or the twist partway through. If you just want a recommendation, both are worth watching, 5cm especially.

There’s been a ton of hype over Shinkai Makoto’s most recent film, Your Name, ever since its release last year. I saw it a few days ago, and though I don’t think it lives up to the hype I enjoyed it well enough and would even say it’s Shinkai’s best movie since 5 Centimetres per Second. Thinking about the movie, though, I couldn’t help comparing it to 5cm. On the surface, they don’t seem very comparable; 5cm is a very grounded movie, and rather minimalist in its plot and characterisation, whereas Your Name falls firmly into the speculative fiction genre, and though the plot isn’t complex compared to many SF stories, 5cm could be adequately summarised in a few sentences whereas this needs quite a bit more space to explain.…

Though I’ve been reading Watamote for a few years now, first via scanlations, then by importing the Japanese graphic novels, I’ve yet to write about it directly. I did talk about the anime adaptation shortly after it aired about a year and a half ago, and my thoughts on that still reflect my opinion of the first few volumes of the source material. As much as I love the early part of the comics, it is a formula that runs a high risk of growing stale – Tomoko comes up with a scheme to get popular quickly, or to impress someone else, this plan blows up in humiliating fashion, Tomoko learns little or nothing, repeat. Luckily, author Tanigawa Nico (actually a two-person writer/artist team) inserts some variety by giving Tomoko other people to interact with, early on her brother Tomoki, her cousin Kii, and middle-school friend Yuu. These volumes add another interesting dynamic by introducing Komiyama, a mutual friend of Yuu, and who has a crush on Tomoki. While we still see Tomoko making a fool of herself on her own like the early chapters, the most interesting parts tend to be those involving the trio of Tomoko, Yuu, and Komiyama. The added interactions also make Tomoko more easily relatable for those who, while uncomfortable in social situations, aren’t quite helpless as she appeared to be early on.

Now, I imported the Japanese editions so, while I think my reading skills are improving over time, getting through was still a bit of a slog. I have noticed that now, when I pick up the official English edition, it sounds a bit off to me. It’s a similar feeling to watching a foreign film subtitled, and then rewatching it later with an English dub; whether the translation is faithful or not (and doubtless the translator in this case is far, far more fluent than I am), the new voices are distracting and bothersome.

On a final note, the seventh volume also came with a DVD with one anime episode on it. My spoken Japanese is noticeably worse than my reading skills so I was mostly lost in about half a minute. Making things even more difficult for me, this seems to be an original story rather than an adaptation of a chapter of the comic, though I think I did manage to follow the gist of the story. The story’s okay, I suppose, but there wasn’t as much Tomoko as I expected, and frankly I’d have preferred an adaptation over this new material. The animation is decent, about on par with the TV anime.

I’m still continuing with Henry Kissinger’s Diplomacy, which is taking a while partly because it’s over 800 pages long and partly because of visiting relatives. In any case, I’ll also concurrently be reading my Japanese editions of Sayonara, Zetsubou-Sensei, starting with volume fifteen.…

Similar for Spirited Away, which I saw in theatre. Thanks to the DVD special features I even learned who Miyazaki Hayao is, and though I had a mild interest in seeing more of his work, and perhaps anime in general, I didn’t pursue that until a couple years later, in Spring 2004, when I stumbled into the manga aisle of a bookstore. That interest in Japanese comics prompted a greater interest in its animated cousin. I’m not sure how I first heard about lain specifically; probably through the forums for the webcomic Megatokyo. I didn’t know much about it going in, either, except that it was vaguely cyberpunk-ish, but then as now I don’t require much more than a few interesting screencaps and a strong recommendation to pique my interest.… 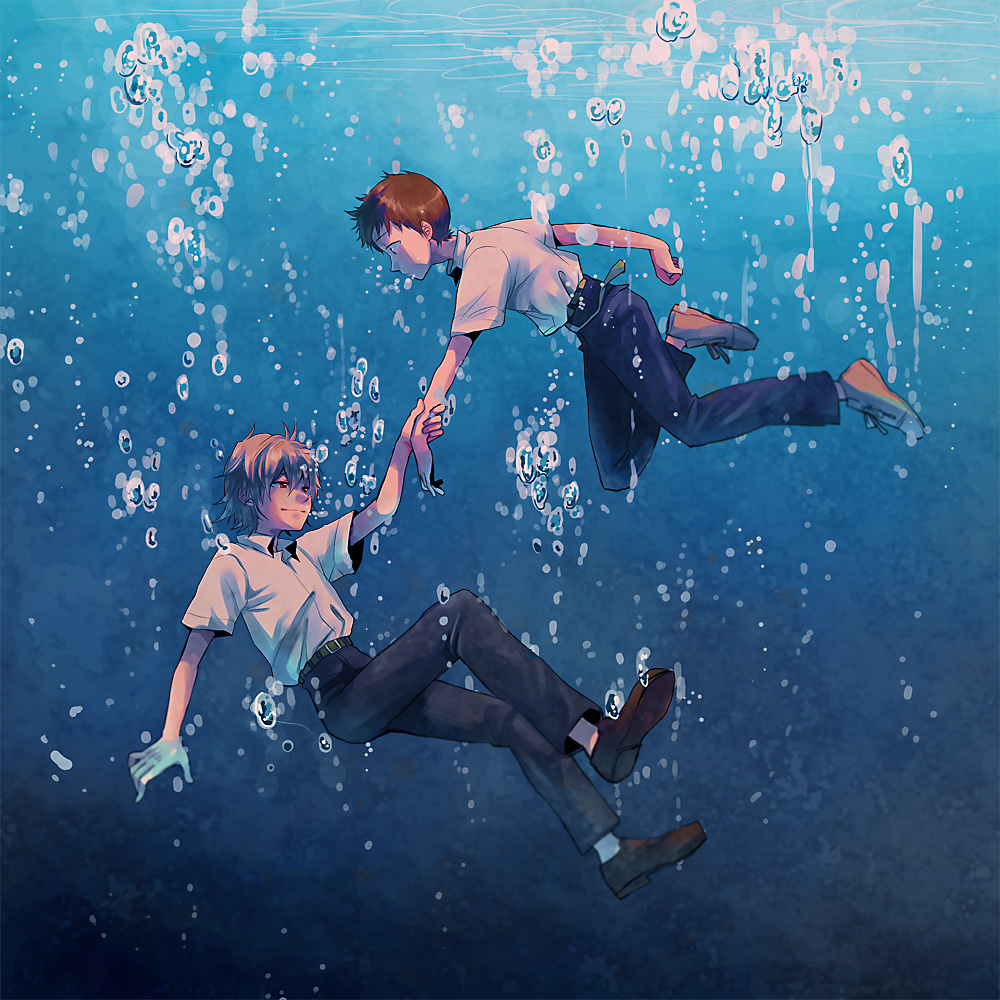 This viewing marks the first time I’ve seen it since becoming an Eva fan after seeing 2.0 in theatre a few years ago, and is the third time I’ve seen it all the way through. I first attempted to watch the series back in high school, in 2005 or so. I say “attempted” because Blockbuster only had the first two volumes and I couldn’t afford to buy the whole thing myself (such is the life of a high schooler), so for a while I knew the story more from Sadamoto Yoshiyuki’s comic version. Even now, it takes some effort for me to remember what happens in the comic versus the anime.…