Lately, I’ve been wanting to re-read some of my old CLAMP comics, and coincidentally while shopping around this weekend I came across their latest work, Gate 7.

I have mixed feelings so far. The first volume has a lot of talking, but I never felt like it was progressing very much. The protagonist, Chikahito, is a high school student (of course!) who loves history and Kyoto, can cook well, is a bit awkward and loud at times, and – actually, he’s basically Watanuki from xxxHolic, also by CLAMP. It’s only the first volume, but the more I think about it, yeah, it’s the same character. I like Watanuki just fine, but he’s not so great that he merits creating a clone here. Here’s hoping he at least develops along different lines later on. 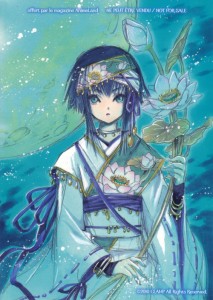 Not that the other characters are much better, so far. Again, it’s only the first volume, but nobody really stands out yet. As for the story, Chikahito visits (and soon moves to) Kyoto, where he’s dragged into getting involved with a group of people fighting supernatural something-or-others – it’s not really clear yet who or what, exactly – in a power struggle that goes back to the Warring States period. I have enough confidence in CLAMP to trust that this will make more sense later on, and I’m just interested enough to give it another volume, but so far it’s mostly alternated between exposition and action scenes that look neat but where neither protagonist nor audience is sure what’s going on.

Translator William Flanagan, who’s also done most of xxxHolic, seems to have done his usual good work, and there’s also several pages of helpful end notes, which I always appreciate.

As for the art, it’s typical CLAMP fare. Fancy clothes, lanky characters, lots of detail – I love it, though those who don’t care for their style won’t be converted here. My one complaint is that there are a few pages that are clearly intended as colour illustrations, but are printed here in black and white, with mixed success. The frontispiece, for example, still looks good, but the illustration between the prologue and the first chapter just looks flat and dull.

Again, though, I’m still glad to see new work from CLAMP, and look forward to the next volume.…