How to Read the Iliad

Note: This is another republication from Thermidor, where it first appeared on March 20, 2018.

“The classics have more and more become a baton exclusively for the cudgelling of schoolboys, and less and less a diversion for the mature.” Ezra Pound’s observation, from a 1920 essay on translations of Homer, may have been true at the time but has, in the following decades, become somewhat optimistic. Often, schoolboys aren’t really taught the classics at all, but insofar as they are, “cudgelling” is still about right. I can’t completely blame those reluctant to read old books, since the very sight of anything from the Odyssey to The Scarlet Letter is apt to bring back memories of chapter quizzes and book reports due by next Friday.

Even if we get past the cudgelling, though, Pound’s reference to the classics as a “diversion” may surprise some readers. Aren’t they supposed to improve our moral character, erudition, cultural literacy, and those sorts of high-minded things? Well, sure, they can do that. However, we’re unlikely to get any of those benefits if reading is too much of a chore, and it’s worth remembering that literature is written, first and foremost, to be enjoyed. Shakespeare, it’s often pointed out, wrote for a popular audience. We may also note that in the Poetics, despite the dry literary analysis, Aristotle clearly enjoys the pleasure and spectacle of poetry and drama, and in Timber, or Discoveries, Ben Jonson says that poetry, among other things, “delights our age,” “entertains us at home,” and “shares in our country recesses, and recreations.”

This is why, though literature has always been a primary hobby for me and one that I’m eager to share, I don’t insist on others delving into it as much as I have. One should have an interest in the arts, but if that’s music, painting, or something else, that’s fine. The goal is to have something, almost anything, better than blockbuster movies, top 40 radio, and other components of mass culture to spend one’s time on. Even non-artistic hobbies, like fishing or target shooting, will work for this purpose. Also, if you do choose to pursue literature, I’d encourage you to focus on an area of particular interest to you. Do you remember liking, say, Poe’s short stories in school? Then start by seeking out other Gothic or Nineteenth Century authors. Do you have a fondness for the Middle Ages? Go check out the many Arthurian romances, then, or a volume of Boccaccio.

Now, with all that said, there are a few authors who every educated person should have a basic familiarity with. These writers are also good starting points if you want to take the study of literature seriously, or if you’re just not sure where else to begin. Exactly which authors would go on that list is debatable, but people like Ovid, Virgil, Dante, and Shakespeare will be near-universal choices. Another would be Homer, and he’s the one I’ll focus on here, and specifically the Iliad. 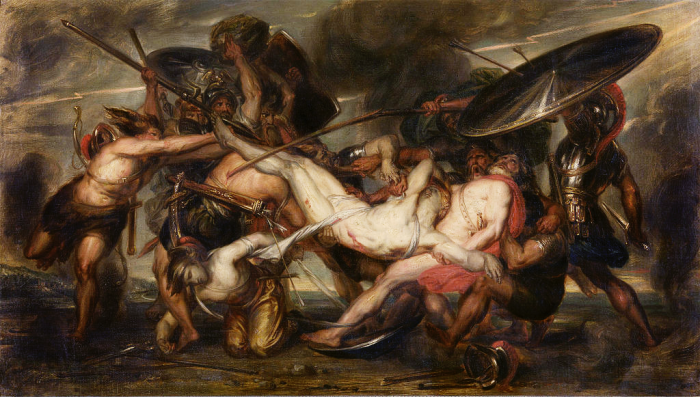 END_OF_DOCUMENT_TOKEN_TO_BE_REPLACED

Notes on the Odyssey

One notable thing about the Iliad is that it inspired a huge number of other poets and playwrights to use it as source material for their own works. Some filled in the gaps left by Homer, since he’d only addressed a relatively small part of the Trojan War, while others covered the adventures of the poem’s heroes after the war. The Greeks themselves were the most prolific and successful at this, but the Romans and even modern authors, musicians, and filmmakers have attempted their own additions and adaptations to the epic. I think it’s safe to say the most celebrated of these attempts was the Aeneid, making Virgil the world’s greatest author of fanfiction, but we’ll get to his work some other time.

Today, I thought I’d share some observations on the only official sequel, the Odyssey. This one needs less of an introduction than the Iliad, since it’s one of the few Classical works still commonly assigned to high school and college students, at least among Americans. I still won’t assume much familiarity – after all, I’m writing in large part for people who’ve finished schooling and are ready for an education. Since it is more accessible than the Iliad, though, I’ll talk about it less formally than I did about that epic and just offer a few observations about it.

So, as you might guess from the title Odyssey follows Odysseus after the Trojan War, whose trip home went about as well as every other hero’s – badly.

END_OF_DOCUMENT_TOKEN_TO_BE_REPLACED

New at Thermidor: How to Read the Iliad

It’s been a while since I’ve posted twice in a day; in fact, I don’t think I’ve ever done that. Well, if my review of the Gongyang Commentary wasn’t enough for you, my latest article for Thermidor is also up: “How to Read the Iliad.” As the title advertises, it’s a gentle introduction to one of the greatest books ever written, for those who may be reluctant to read Homer for whatever reason.

There’s a lot to say about the Iliad, of course, but I hope this is useful as a starting-point. I may write a follow-up just going over a few odds and ends about the poem that I found interesting, but aren’t really worth a post to themselves and didn’t really fit into that main article. We’ll see if I can come up with enough to justify a second article.

On a side note, I actually attempted to write about the Iliad after I first read it back in 2011. Looking back now, it’s funny how difficult it seemed for me to come up with even that short post about it. What I came up with isn’t even bad, really, it’s just boring and doesn’t have anything to say. I’ll keep the post up, but I may simply replace the link to it on the index page with this newer one.…

END_OF_DOCUMENT_TOKEN_TO_BE_REPLACED

A Shortcut to Literacy in the Western Literary Tradition: An Outline

For the last few years, I’ve occasionally passed time by thinking of the shortest way to become literate in the Western literary tradition. In other words, what is the smallest number of books one can read, and which books, to say one is familiar with the general outline of Western literature?…