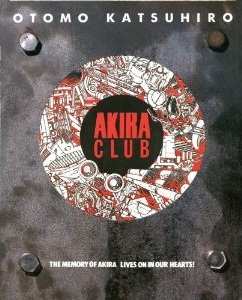 The book collects Otomo Katsuhiro’s preliminary sketches, promotional art, title pages, and other odds and ends from the Akira comic, along with a couple things for the film adaptation, with many short comments from Otomo. Kodansha originally plublished this in Japan in 1995, and Dark Horse released it in the United States in 2007.…

END_OF_DOCUMENT_TOKEN_TO_BE_REPLACED

My writing has slowed down lately, but that’s because holy crap have I been consuming a lot of media. Here are the highlights of what I’ve read in the last couple weeks:

Akira – by Otomo Katsuhiro. I wrote about this a couple posts back, and the remainder of the series did not disappoint. The artwork was excellent throughout, the story kept me on my toes, and the plot kept up a breakneck pace which made a set of very long books feel much shorter.

History of the English-Speaking Peoples – by Winston Churchill. I finished volume two, but don’t have three, which I’m afraid seems to have gone out of print in the edition I have (I have vols. 1, 2, and 4). I’ve long felt like I should improve my grasp of English history, and I’ve certainly done that. Churchill, for the most part, does a good job avoiding taking sides in his presentation, though he assumes that readers know their British geography, so I had to get out my atlas at a couple points.

The Hero with a Thousand Faces – by Joseph Campbell. Cripes, this was disappointing. Campbell asserts, but doesn’t really prove, that mythology and dream analysis are connected, and spends a large portion of the book discussing psychoanalysis and the similarity between the meaning of symbols found in dreams and the symbols of mythology. His idea of the “monomyth” is already so broad that it’s a bit suspect, but I could accept his outline of the archetypes that connect world mythologies. Adding in the psychoanalysis stuff was too much.

More than that, though, I object to some of his ideas about the importance of mythology. I’d agree that myths are important to society and that every culture has and needs them. I’d even say that men generally learn better allegorically than by reason. However, he also says, referring especially to Christianity, that it doesn’t particularly matter whether these myths are true, and that all religions and mythologies teach fundamentally the same things. Unless I misunderstood the point Campbell was making, the latter idea is plainly false. As for the former, though I agree that “mere” symbolism can be quite powerful, and a story needn’t be true to have meaning, surely a story is all the more powerful if it is literally true…

END_OF_DOCUMENT_TOKEN_TO_BE_REPLACED

I’ve been pretty busy lately, forcing me to slow down a bit on my reading schedule. However, I’ve continued to find time for a few things, so I thought I’d share a couple highlights.

The comic that’s most commanded my attention lately has been Akira, by Otomo Katsuhiro. I re-watched the film adaptation for the first time in years a couple months back, and liked it far more than I remembered, and since I’ve also read and enjoyed another of his works, Domu, I figured I’d try out the graphic novel. The first two volumes have not disappointed me.

Like Domu, the art is very detailed; backgrounds and characters are all realistically and, I imagine, painstakingly rendered. I don’t know if I’d call it “beautiful” since the story is brutal, but it’s very impressive. So far, the comic and film are loosely similar, but the end of volume two is roughly where the film ends, and I’ve still got four volumes to go.

As for the plot, it’s almost non-stop action. There’s constantly something going on, and this edition doesn’t even have chapter breaks, which makes me wonder how this was published in Japan. If it was serialised, where were the chapter breaks? The action is continuous between volumes, too -the first two, at least, have ended on cliffhangers.

The only downside is cost – $25 per volume, with the last couple costing a little more. I am willing to pay more for a superior product, and this edition does have large, quality paper and a few colour pages, but the prospect of paying so much for a six-volume series dampens my enthusiasm a bit.

I’ve also been following Viz’s re-release of Sadamoto Yoshiyuki’s Neon Genesis Evangelion graphic novels, which they’ve been releasing at one chapter a week on their iOS app. I like the weekly releases more than getting one volume every few months, though I do wonder what they’ll do when they reach the end of the most recent volume. Release new chapters as they become available, or revert to releasing full volumes?

Eighteen chapters (three volumes worth) in, and so far the plot’s essentially the same as the TV version. However, I do prefer Sadamoto’s approach. First of all, the art is detailed very appealing, more appealing (to me at least) than the TV animation, though I don’t think it beats the higher-budget films on that front.

The main difference for me, though, is that Sadamoto takes a subtler approach to characterising Shinji. I’ll admit the TV and End of Eva versions of Shinji annoyed the hell out of me, but Sadamoto’s handling makes him far more tolerable. For example, though still an (understandably) weak-willed character, he does show a hint of a backbone when he first pilots the Eva, saying to himself “I will not let father call me a coward!” The defiance, even in an internal monologue, makes a huge difference.

Then there’s that scene where he goes to Rei’s apartment to give her a new ID card, and she walks out of the shower while he’s in her room trying on a pair of glasses he found; she tries to take the glasses away, he falls on top of her, and knocks over a drawer full of underwear. The TV version of this scene is painfully awkward, and Sadamoto has the same scene except Shinji doesn’t put on the glasses (he just picks them up and examines them) and no underwear goes flying. So, we still get the awkwardness without making Shinji look like a total social imbecile. I have a love/hate relationship with the original series, but having a tolerable protagonist goes a long way to erasing the hate part of that equation.…