I wrote about the first two volumes of Zekkyo’s comic adaptation of ToraDora way back in July 2011, and volume three a few months later. Since then, each volume has continued to follow the anime fairly closely (I haven’t read the original novels, so I can’t make a comparison there), and my opinion of it has remained consistent from volume to volume. The character art is good, the jokes generally work, the drama is, perhaps, a bit melodramatic at times, but that’s just part of the style. It does have a high school setting, which I almost always dislike, but I’ll give it a pass since I’ve been following the story for so long.

The things I’ve complained about previously are still around; background art is rather plain, it’s a bit wordy, and there are a few annoying localisation choices. Too much saying “like” and “totally,” and using kaicho instead of “class president,” which is especially distracting because one moment you have a character talking like a stereotypical valley girl, then they’ll throw in the obviously Japanese kaicho. Again, though, it’s not too bad, and the translation does a decent job overall at giving each character a distinct voice.

So overall, it is a solid enough adaptation. The fact that I’m seven volumes in, four years after starting the series, is proof enough that Zekkyo’s doing something right. The strength of the original story shines through, so while it’s not a must-read by any means, if you’re a fan of the anime and want more of this story, by all means check it out.…

END_OF_DOCUMENT_TOKEN_TO_BE_REPLACED

First, a programming note – over the next couple months, I’ll be finishing up my web design certification, and I’ve just begun a Biblical studies programme, so I’ll be busier than usual. I’ll continue to blog and update every Sunday, but expect more short posts like this for a little while.

With that out of the way, I’ve gone through a few graphic novels over the past couple weeks. I talked about Gunslinger Girl volumes 11-12 in the previous post, but here are the others:…

END_OF_DOCUMENT_TOKEN_TO_BE_REPLACED

Most of what I said here about the first two volumes of the ToraDora graphic novels applies to the recently released third volume, but there are some improvements. ToraDora still lays on the dialogue thick, but the talkiness feels less oppressive than previous volumes. Zekkyo’s varied panel layouts and ‘camera angles’ help. The art also changes occasionally, for example for a Fist of the North Star reference, though whether that was particular gag was entertaining or just awkward I can’t decide.

Most of this volume focuses on Ami, and I appreciate the break from almost-exclusive treatment of Taiga and Ryuuji, though Ryuuji still serves as our point-of-view character (he’s the only one to provide internal monologues, and is present for every scene).

The translation (by Adrienne Beck, with ‘adaptation’ by Bambi Eloriaga-Amago) sounds decent in English, and I appreciate that each character has their own mode of speech. My only complaint is when one character is referred to as ‘kaicho‘. As far as I know, ‘kaicho‘ simply means ‘president’ or ‘chairman’ (she’s president of the student council), so why not just call her that? If there’s some special meaning to ‘kaicho‘ that rendered it untranslatable, it’s not explained anywhere, not even on the one page with translator’s notes.

On a final note, not that I’m complaining, but is it just me or did everyone go up a bra size? That excludes Taiga but includes Ryuuji, as an imagined ‘Ryuuko’ gives ToraDora its best ‘WTF?’ moment so far.…

END_OF_DOCUMENT_TOKEN_TO_BE_REPLACED 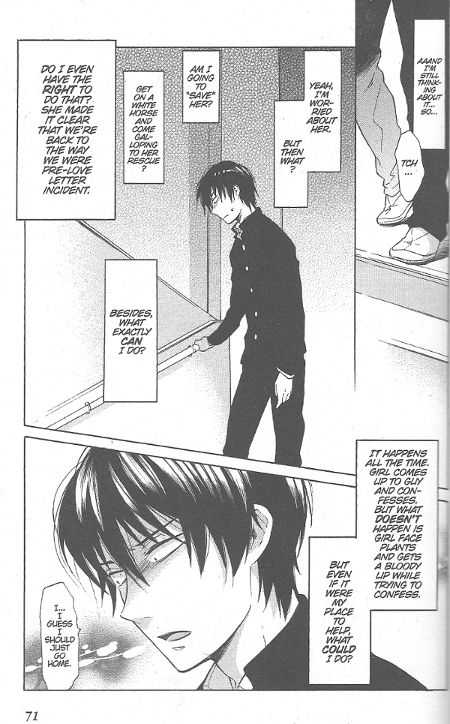